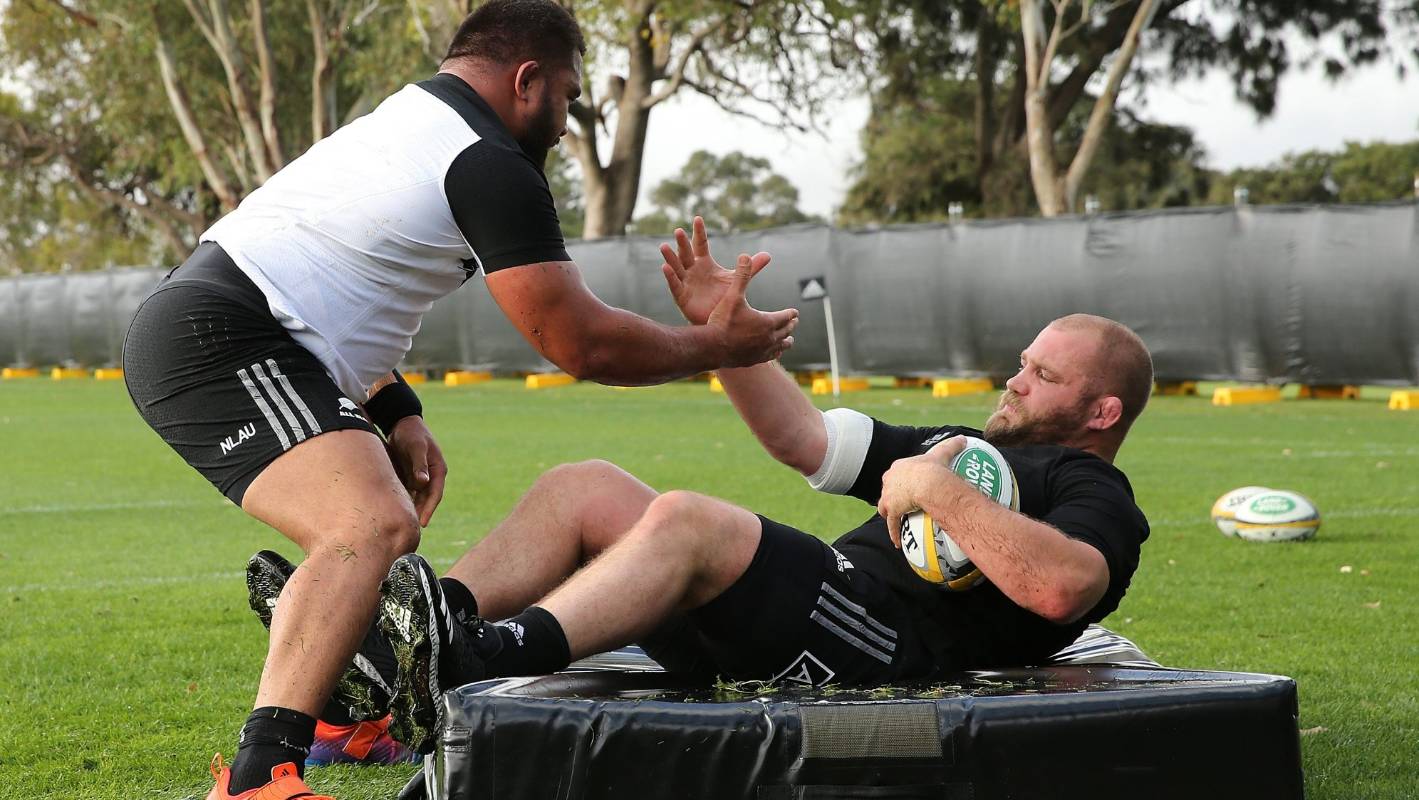 Owen Franks has played 108 tests, won two World Cups and was scrummaging the cornerstone of the All Blacks for a decade. But the 31-year-old tighthead prop faces an anxious wait to find out if he can be squeezed into Steve Hansen's 31 for their shot at history in Japan.

Hansen will name his World Cup squad on August 28, with a tighthead prop, the final loose forward spot and, to a lesser degree, midfield shaping as the big selection decisions for the All Blacks selectors.

The coach admitted before his All Blacks disassembled in Auckland on Sunday that standout final Bledisloe performance at Eden Park on Saturday night had solidified thinking in some areas and perhaps made it tougher in one or two others.

READ SEA:
* RWC squad named in 10 days
* Ranking drop bemuses Hansen
* Nuggy: I could see it in the eyes
* Hansen: 'Not on my watch'
* Bledisloe redemption for ABs

Let's look first at what Saturday night's outstanding 36-0 shutout of the Wallabies told Hansen in terms of his World Cup selection.

All three surprises starting selections stood up magnificently and assuredly booked their tickets to Japan. Hansen rolled the dice a little for this pivotal test by picking Nepo Laulala at tighthead prop and George Bridge and Sevu Reece on the wings, and the gamble came up a winner, enhancing Hansen's reputation as a selection savant.

Despite the coach playing down his scrum after the test, Laulala's introduction to the No 3 jersey produced stunning results. The set piece was a weapon again and the big prop was also active around the field, running five times, passing eight and nailing five of his six tackles. He ticked all the boxes asked of him.

The All Blacks coach admitted he doesn't even understand how the points system works.

So too did Greenhorns Bridge and Reece as their energy, efficiency and activity implemented decisively in a vastly improved display from the back three. On a challenging night for running rugby, this was the best All Blacks attacking display in a year, with both wings rewarded with a try for their efforts.

All three newbies can start working on their Japanese, Laulala as likely starting tighthead and Bridge and Reece in a backfield quintet alongside Ben Smith, Rieko Ioane and Jordie Barrett.

Patrick Tuipulotu also impressed enough in the second row to likely earmark him as the fourth lock required because of the Brodie Retallick situation (recovering from his dislocated shoulder) and Sonny Bill Williams likewise at No 12, with a fourth straight appearance easing the doubts over his durability.

Now, where are the puzzlers?

Hansen will take five props to Japan, and whether he can find a room for Franks is going to be tight. The four who featured on Saturday Night – Laulala, Joe Moody, Ofa Tu'ungafasi and Angus Ta'avao – are probably there. Then it comes down to Franks or Atu Moli for the fifth spot. An extra tighthead or loosehead?

Franks' experience possibly gives him the edge; but can the All Blacks afford to carry three specialist tightheads? Laulala, Ta'avao and Franks are all principally right-side scrummagers, while Tu'ungafasi is also capable of playing there.

It may come down to whether the selectors are comfortable with Ta'avao covering the loosehead at the pinch and if the answer is no it might squeeze Franks out of the mix. It would be a brutal call on a player who was a fabulous servant for the All Blacks, starting 98 of his 108 tests in the No 3 jersey.

Often maligned, Williams showed his wares as the All Blacks retained the Bledisloe Cup.

Hansen will probably only have room for five specialist loose forwards if he takes a fourth lock. Ardie Savea, Sam Cane and skipper Kieran read three of them, and Matt Todd the fourth as backup No 7. That leaves one spot for a 6/8. Liam Squire might be the sensible pick if he makes the call to Hansen. But one really knows how to play out and the coach has made it clear the ball is in the player's court.

But if Squire doesn't feel up to it, it probably comes down to a decision between Luke Jacobson and Vaea Fifita, with the youngster's ability to cover both spots giving him an edge if his concussion issues don't reoccur.

Midfield is tight, but the reality is Williams has answered the bell, leaving Ngani Laumpae as the unlucky omission, all things being equal with Ryan Crotty's return from that fractured thumb.

The rest pretty much picks itself, with Hansen conceding that most of the "robust" discussion has already taken place. "We've got 10 days… we've baked a lot of cake, now it's about getting it out of the oven and putting a bit of icing on it."