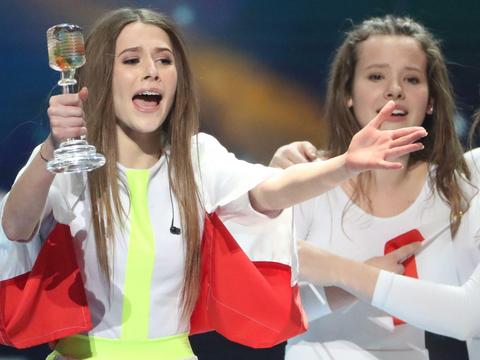 The competition for Eurovision Song Contest has been organized since 2003 and is organized by the European Broadcasting Union (EBU). Participants are young performers from 9 to 15 years. This year's 16th edition of Eurovision Junior was held in Minsk, Belarus. Representatives of twenty countries performed on the scene: Ukraine, Portugal, Kazakhstan, Albania, Russia, the Netherlands, Azerbaijan, Belarus, Ireland, Serbia, Italy, Australia, Georgia, Israel, France, Macedonia, Armenia, Wales, Malta and Poland.

She was Polka – Roxana Węgiel who won the hearts of the jury and the audience. The 13-year-old with the song "Everyone I want to be" took first place. At the Eurovision Song Contest, she scored 215 points. This was the first time that Poland won Eurovision Junior.

The second place at this year's Eurovision Song Contest for children was taken by France's representative – Angelin (203 points), and the third Jael from Australia (201 points).

Who is Roksana Węgiel?

In February of this year, Roksana Węgiel won Poland's first "The Voice Kids". The 13-year-old was in the team of Edyty Gornyak. The decision of the audience became the best voice of children in Poland and received a financial scholarship of PLN 40,000 for further music education. The prestigious statue "The Voice Kids" was won by Jacek Kurski and a record contract with Universal Music Polska Marta Gałuszewska – winner of the 8th edition of The Voice of Poland.

Will Polka win the Eurovision Song Contest? It would be a historic feat!

We know the winner of "The Voice Kids". This is Roxana Charcoal