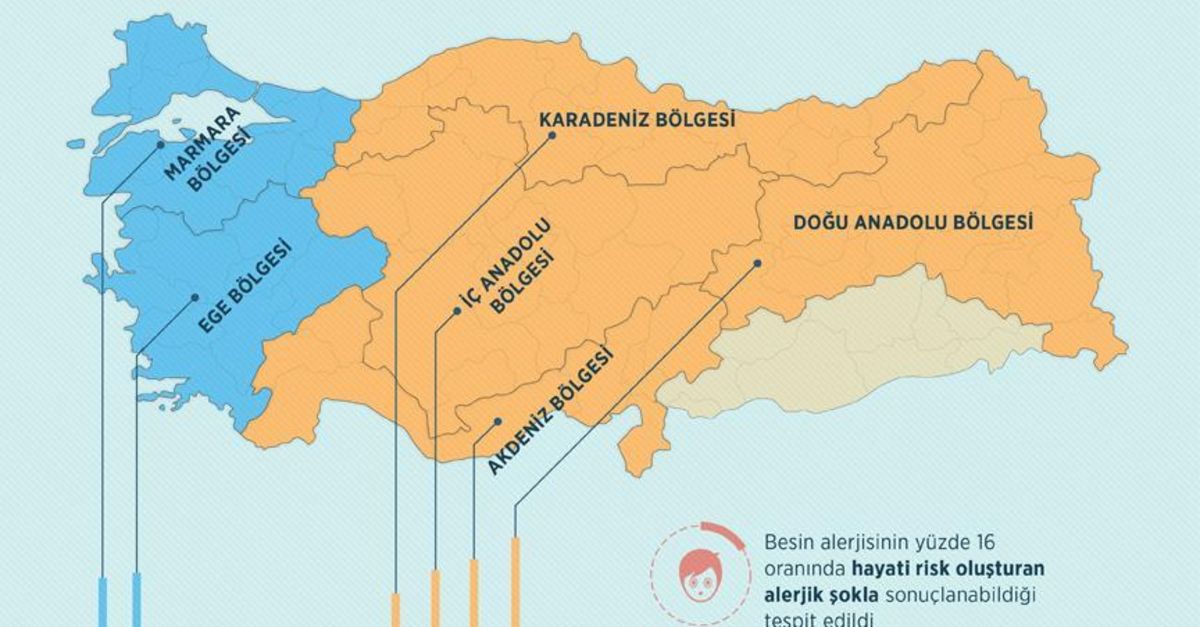 Akdeniz University of Medicine Faculty prof. In a study conducted under the coordination of Ayşen Bingöl, food allergy has shown regional differences.

According to AA; Akdeniz University of the Medical Faculty, Department of Pediatrics, prof. Dr. A 50-man team led by Bingol, Istanbul, Aegean, Çukurova, including Karadeniz Technical University and Eufrata, is a food allergy job at 25 university hospitals in different regions of Turkey.

In a study conducted on a food allergen diet for 248 years, food allergies ranging from asthma and eczema to retardation of growth, and even to death, showed geographical differences.

According to the research, "milk allergy" was found in the Aegean and Marmara regions, while it was found that "egg allergy" was common in the regions of the Mediterranean, the Black Sea, Central Anatolia and East Anatolia.

In the eastern Anatolia region, 82.1 percent of surveyed children, 71.8 percent in the Mediterranean, 66.7 percent in the Central Anatolia Region and 55.6 percent in the Black Sea were found to have egg allergies. In the same age group, milk allergy was found in 65.6% in the Aegean region and 63.1% in the Marmara region.

It has also been found that food allergy leads to allergic shock, representing 16 percent of vital risk.

"Food allergy can cause problems"

"Turkey 25. National Congress Allergy and Clinical Immunology", which is also President Prof. Dr. Bingol, said AA in a statement to reporters, said that for two years he was researching a challenging place to learn the status of food allergy in children in Turkey.

As in all the world and Turkey Expressing to become a major health problem for food allergies in Bingol children, he said: "According to the results of our work, the Aegean and more milk allergy is seen in Marmara, the Mediterranean, the Black Sea, Central Anatolia and eastern Anadolia. Egg allergies are often they are seen in their regions and are often seen as allergies to foods from shellfish, fish, nuts and flour, and food allergies can also develop from rare foods such as rice, meat and sesame. Losing appetite, vomiting, changing chairs, eczema, asthma and retardation of growth.

Pointing out that food allergy can cause allergic shock in children, Bingöl said that these patients should wear adrenaline lead that is used to treat serious allergic reactions that endanger life.

Bingol, who said that failure in the diagnosis of food allergy would lead to significant health problems in the child, said allergy experts could provide a diagnosis based on clinical findings, physical examination, history, and laboratory results.

DIFFERENCE OF THE AGE GROUP

"The main reason why food allergies have geographical characteristics is that people eat and consume eating habits and food," Bingöl said, by changing the molecular structure of nutrients, according to processing, he said.

Taking into account all age groups, most children are allergic to Bingöl feeding, says the following information: "0-2 years old by age group, most commonly milk, 2-5 years of milk, eggs, shellfish, walnut, fish, and flour due to Food allergies are seen. When a child grows, seafood and dried fruit are gaining importance. We have a geographically rich country. Different eating habits and different patterns of food consumption can lead to differences in these food allergies. "