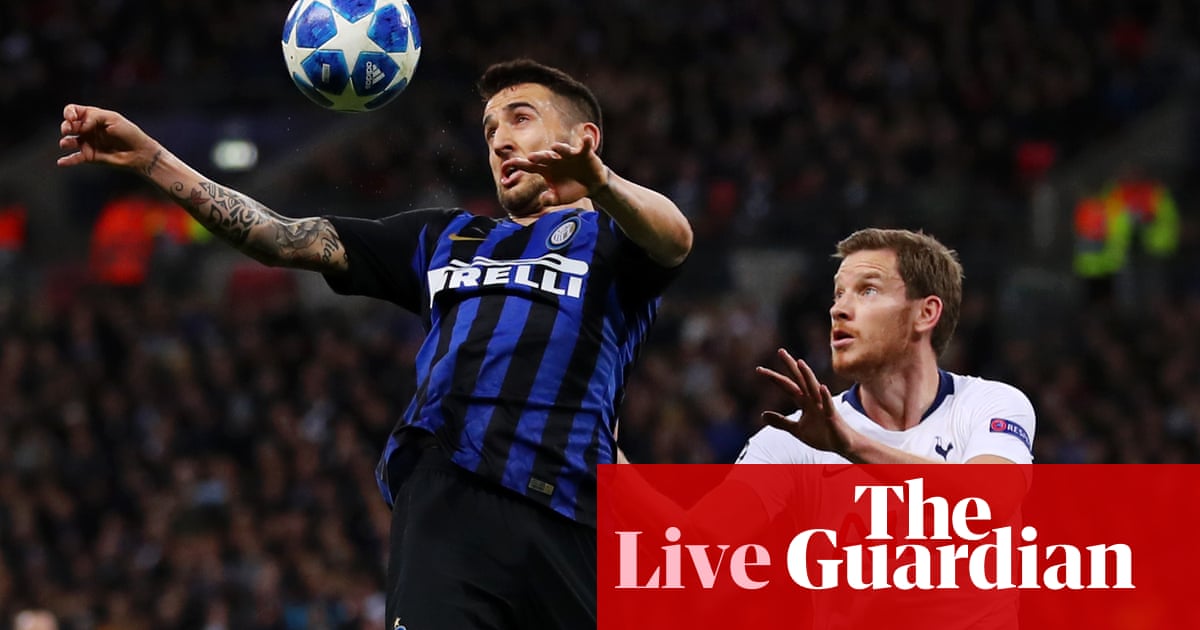 It's been tense and uneventful. Inter will be pleased. Tottenham have some thinking to do during the interval. They're 45 minutes from an early exit. See you in 15 minutes.

45 min + 1: Moments later, Inter cut Tottenham right on the right and work the ball into the area for Icardi, who can not quite sort his feet out. The ball runs to Valero, who takes too long to shoot, allowing Aurier to rob him.

45 min: That's a shocker from Lamela! He goes over the ball and jumps into a two-footed challenge with Brozovic, catching the Inter man with his studs. He's very lucky to be booked.

43 min: Kane's deflected shot from the left hits the side netting. Corner. Moura meets Lamela's corner with a firm header, but the whistle has already gone for Inter free-kick.

42 min: Despite that Winks shot against the bar, Tottenham are struggling to create chances. They miss Eriksen's guile and Son's energy.

38 min: Tottenham eventually won and back outside the Inter area. Eventually Winks finds room to get the ball out of his feet and try a shot from 25 yards. The midfielder's curling effort manages Handanovic's despairing dive, but it hits the face of the bar and bounces to safety!

37 min: Inter are taking control again, simply by keeping the ball from Tottenham.

32 min: Alli wriggles into the area from the left. Moura can not control his cutback. Sissoko tries a shot: blocked. Tottenham are now stepping up, though.

30 min: Just when it seems that Tottenham are starting to wobble, Sissoko steps in to win possession in the midfield and rumble down the right. Just look at him go! A pure force of nature! Sissoko clips a pass inside and Alli lets it run to Moura, who sidefoots straight at Handanovic from 20 yards.

28 min: Perisic flicks on D'Ambrosio's long ball and catches Tottenham dozing at the back. The ball is kicked out to cover the lead to Icardi something to chase. The striker is too fast for Alderweireld, who pulls him back 30 yards from goal. He's booked. He's lucky and covered a couple of defenders.

27 min: Unfortunately for Pochettino, Lamela and Moura are struggling to vindicate his decision to start them over Eriksen and Son. They'll need those two in the second half.

25 min: Winks run to Vertonghen's clearing header and knocks an awkward backpass to Lloris. The Tottenham goalkeeper has struggled with his feet during this season and he only succeeds in sending the ball to Perisic. He's relived the Croatian can only win a corner.

22 min: Lamela races back to challenge Asamoah on the left. He slides to win the ball but can not stop it running behind for an Inter corner. Politano's delivery is nothing. This is very tight.

19 min: Lamela breaks the lines and tries to bend one past Handanovic from 20 yards. The ball dips and swerves wide.

18 min: Liverpool are a goal down against PSG. The Europa League semi-finals will be Arsenal in Tottenham and Chelsea in Liverpool.

17 min: Alli looks to slip a pass through to Davies, but it's just overhit. Davies would have been in. Alli is furious with himself for not weighting it correctly.

14 min: Inter stroked the ball around in the midfield, looking to take the sting out of the game. They only need a draw.

12 min: After a scrappy spell, Kane takes matters into his own hands, dropping deep to collect possession and start a Tottenham attack. Out of nothing, he injects some urgency into the move with a brilliant nutmeg to hoodwink Nainggolan. Off he goes! Inter backtrack and Kane finds Allie, who lashes a rising drive just over the bar from 20 yards.

8 min: Tottenham are up for this. Now Lucas Moura charges in the area before going down with Politano nearby. Cuneyt Cakir waves away Tottenham's loud appeals for a penalty.

7 min: Kane, full of running, climbs the area from the left. He tries to barge Brozovic aside, although the Inter midfielder remains strong to force Kane wide. He still manages to take a shot and Handanovic, taken by surprise, saves with his chest at his near post.

6 min: Moura can not make a proper contact with Lamela's corner. Winks collects on the right and crosses, but the ball ends with Handanovic. "It's about time they ripped the red seats out on the halfway line at Wembley and made it a safe standing area," Roger Kirby says. "Then the giveaway ticket holders can come back from hospitality whenever they want, and some real fans get a good view."

5 min: Tottenham press down the left, Davies winning his team's first corner. The big men are moving forward from the back. The referee, meanwhile, keeps a close eye on all the pushing and shoving in the area.

2 min: Inter fans are making the racket. They've even done what appeared to be their version of the Icelandic thunderclap, just to make Harry Kane have nightmares of some rubbish corners.

Peep! Inter, in their famous black and blue stripes, get the game underway. They're kicking from right to left in the first half. Tottenham do not take long to win it off Luciano Spalletti's side.

Here come the teams! Of course, this is a fixture that evokes memories of Gareth Bale ripping into Inter at White Hart Lane back in 2010; taxi for Maicon and all that. Tottenham won 3-1 that night and what'd they give for a repeat of that scoreline here. In their favor is the fact that Inter have never beaten them in London. Inter have beaten Arsenal and Chelsea in London. But not Tottenham.

Jim Denvir emails to point out that two wins could be enough for Tottenham. Their 2-1 defeat in the San Siro means a 1-0 win or a win by two goals would, of course, put them in the driving seat tonight. Then they would just have to beat Barcelona away. Damn permutations.

Hello. It's hard not to admire this Tottenham side. In fact, even though journalists should have no bias (LOL!), It's hard not to like them. They do not spend loads of money, they have one of the best managers in Europe, they have some of the best young players in Europe and they are capable of playing outstanding football, all of which means they will probably not be criticized too viciously if they end up crashing out of their Champions League group for the second time in three seasons. Looking at the wider picture, it's clear they're still heading in the right direction under Mauricio Pochettino – assuming, of course, the Argentine hangs around long enough to sample everything on offer in the cheese hall at the new White Hart Lane.

Ah, there's the rub. It's the fine details that count on this level and that's something Tottenham has failed to address in the past few months. The harsh truth, sadly, they will only have to blame if they end up playing Europa League football in the new year. Small mistakes will eventually catch up with you and Tottenham, a team that still leaves you wanting more at times, have been making too many on and off the pitch. Once again they find themselves playing a big game at Wembley instead of their new home and if they do not beat Internazionale this evening it will be as far as their Champions League campaign. The heat is on!

Whether it should be, mind you, is another thing. This was a hard group, no doubt about it, but Tottenham had chances to put themselves in a much stronger position. The carelessness began when they allowed Inter to stage a late fightback in their opening game at San Siro and it reached a peak when they managed to draw 2-2 with PSV Eindhoven, the group whipping boys. That means they have to win 1-0 or two goals here to take control of their head-to-head with Inter, and then stun Barcelona in the Nou Camp for two weeks. Anything less than that scoreline here and they will either be out, relying on goal difference or hoping Inter will not beat PSV at home in their final game. Hmm. I do not like those odds, especially as Inter, third in Serie A, are tough opponents. However, Pochettino is nothing but relentlessly positive and Tottenham come into this one fresh from thrashing Chelsea at Wembley on Saturday. Now more than ever, they have to keep the faith.